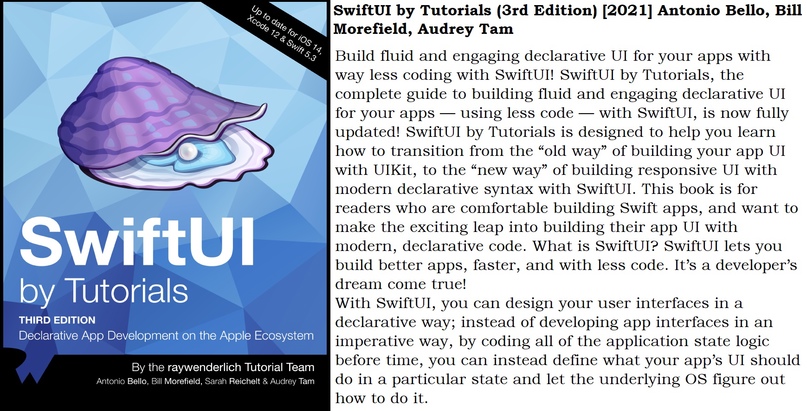 Physics.Math.Code.Books 11 июн 2021
SwiftUI by Tutorials (3rd Edition) [2021] Antonio Bello, Bill Morefield, Audrey Tam Build fluid and engaging declarative UI for your apps with way less coding with SwiftUI! SwiftUI by Tutorials, the complete guide to building fluid and engaging declarative UI for your apps — using less code — with SwiftUI, is now fully updated! SwiftUI by Tutorials is designed to help you learn how to transition from the “old way” of building your app UI with UIKit, to the “new way” of building responsive UI with modern declarative syntax with SwiftUI. This book is for readers who are comfortable building Swift apps, and want to make the exciting leap into building their app UI with modern, declarative code. What is SwiftUI? SwiftUI lets you build better apps, faster, and with less code. It’s a developer’s dream come true! With SwiftUI, you can design your user interfaces in a declarative way; instead of developing app interfaces in an imperative way, by coding all of the application state logic before time, you can instead define what your app’s UI should do in a particular state and let the underlying OS figure out how to do it. What’s more is that SwiftUI lets you build modern, responsive UI and animations for all Apple devices — not just iOS. So whether you’re building apps for iOS, watchOS, tvOS or any other Apple platform, you can use the same concise, natural language to describe your UI and have it look stunning — no matter where your code runs. In addition, SwiftUI’s built-in automatic support for things such as dark mode, localization and accessibility, along with Xcode 11 support for drag-and-drop design and instant preview makes it easier to build apps than ever before. Who is this book for: This book is for intermediate iOS developers who already know the basics of iOS, and who wish to know everything there is to know about SwiftUI. It starts with a basic introduction of the toolkit and its features, with later chapters teaching you more complex concepts like testing and animations. 💾 Скачать книгу https://t.me/physics_lib/7834 #программирование@physics_math #ios@physics_math #swift@physics_math #objective_c@physics_math #программирование #ios #swift #objective_c #apple
Поделиться:
Эта статья была автоматически добавлена из сообщества Physics.Math.Code.Books
Источник